Horse stories: The story of Tarantella

Tarantella van de Guldenberg was a KWPN mare, born in 2000. Her owner was also her breeder. She was weaned late and had been raised in a rearing facility. Once out of rearing, the process of starting her under saddle began. Tarantella slipped on the lunge line, causing swelling in her leg. The vet couldn’t find anything, but she didn’t pass her grading inspection. Despite that, people were interested in her and she was sold and later resold. The breeder came across her on social media and continued to follow her. She was eventually sold to people who took very good care of her, but were put off by her behaviour. In the end, the breeder was able to bring her back home. She did everything she could to make Tarantella’s life as comfortable as possible, but saw that she was in a lot of pain. In 2018 she was donated for dissection.

In motion, Tarantella clearly lacked proprioception and was lame in both walk and trot. She regularly rotated her left fore foot out and was narrow behind. She also had too much vertical head/neck movement. The main findings of her assessment were the problems in the hindquarters, back and overall neurology.

During the dissection, we found out that Tarantella had the genetic disorder ECVM. ECVM stands for Equine Complex Vertebral Malformation. It is a malformation of the cervical vertebrae C6 and/or C7. Horses born with this deformity may have various muscles that attach abnormally or extra muscles that are not usually found in horses. In Tarantella’s case, the phrenic nerve pinched the scalenus muscle. This caused her unpredictable behaviour and was also the reason it deteriorated over the years. The behaviour of horses with C6/C7 malformation is known to deteriorate from the age of 9 upwards. Tarantella showed compensation patterns all throughout her body. It is extremely important to learn more about ECVM and its effects on the horse’s body.

Hopefully this case has inspired you and given you new insights so that Tarantella’s story will not be forgotten. The more horses we can study and compare, the more we can learn! Would you like access to Tarantella’s full story? You can find it in the online Equinestudies course ‘The Horse Inside Out’; click HERE to go to the web shop. 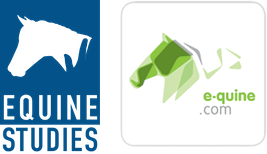